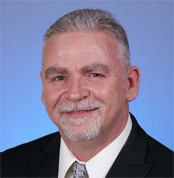 When you get to the end of a 43-year career in one place, you're hopefully leaving something behind that people can build upon, that people can draw strength from, that can provide the next step to a higher level.

This month Dave Henry will be retiring as the Chief Operating Officer for Lifespire. When he began in 1979, Lifespire didn't have a chief operating officer; it didn't have a lot of the people who are there today. And today it is serving 10 times the number of individuals it had when he first started. One of the things that Dave Henry developed was the willingness not only to work but to learn; learn from situations, learn from people, even learn from institutions by going back and getting his master's degree when he was starting a family. He knew that getting that degree was going to help him in is position and, in the long run, help Lifespire move forward. We all want to leave something behind that makes a difference.

Some of the ways Dave Henry made a difference at Lifespire was his ability to connect and reach people at a number of levels creating pathways to building relationships that built the organization.

David explained, “The time to develop a sense of urgency isn’t when urgency erupts, it's before it happens. Over the last two years, what was really underneath the surface at Lifespire, rose to the top. Our staff really stepped up to the plate at all levels. Yes, we had staff shortages, and we may have had only one or two staff on duty when we should have had three or four, but you know, we had those who came to work and stayed from many, many hours. That was remarkable. The people didn't have to do that; they could have quit. I give them tremendous credit for sticking it out. It was no easy time to be working with people who had COVID-19.”

“Lifespire had a number of transitional periods, the most recent occurring during COVID-19, but looking back, in the 1990s we had to transition from the point that we're not just taking care of people to actually encouraging people to learn to make choices for themselves. And that's what we wanted the people to do. We wanted them to make decisions for themselves.”

“The advice that I would give to my successor is to appreciate the talents of the people around you. I have worked with a remarkable group of people, and it's important to listen to other points of view sometimes. One of the things that I've learned is that being a leader doesn’t always look like the things that “you do.” Leading at Lifespire taught me leading starts with listening. You kind of want to lead and do, as opposed to listen. It takes practice to learn to keep your mouth shut and listen to what other people have to say.”

“A couple of the memories I had with my involvement with the founders, Ida Rappaport and Harry Kamish, I'll take with me for a long time. I remember Harry was always just so friendly. He always read the various New York City newspapers every day. And I remember Ida, she worked really hard, and she would greet me at times kissing and hugging me, and I would always have to go into the bathroom and wipe the lipstick off my cheek because that's just who she was. She was lovable.”

“But leaving Lifespire is somewhat bittersweet for me; it'll be difficult to leave the organization at such a time as this. But I’m so thrilled to have worked with such amazing people. I've done some consulting with other organizations, and literally at the end of the day I've always said to myself, thank God I work at ACRMD or thank God I work at Lifespire because no other agency could compare to this one.”