“How many steps are we willing to climb?”

It is time to reaffirm our commitment to the field of disability and celebrate one of the great advances in civil rights legislation, the Americans with Disabilities Act, signed into law on July 26, 1990.

While Disability Pride Month designation is not officially recognized by the federal government, this month provides an opportunity to be very public about the rights of individuals with disabilities, including those with intellectual and developmental disabilities. Despite important laws, the reality is that fighting for the rights of people with disabilities is a daily undertaking because vulnerable persons have yet to be fully recognized or included in our society.

The pride is in the positive contributions that individuals make every day. There is no question that we have to overcome the many barriers and obstacles to achieve the inclusion that was encased in the spirit of the ADA. The original text of the ADA reads:

PURPOSE — It is the purpose of this Act:

As we are well aware, getting any civil rights legislation passed in the United States is a long-term endeavor. Protecting these rights is equally challenging. The ADA is a case in point. The U.S. Congress passed a sweeping set of amendments to the ADA in 2008 in order to overcome several federal court decisions, including Supreme Court decisions. The clear intent was to narrow the ADA protections.

Fortunately, in contrast to these Congressional decisions was the U.S. Supreme Court's 1999 landmark ruling in Olmstead v. L.C. (Olmstead) that found the unjustified segregation of people with disabilities is a form of unlawful discrimination under the Americans with Disabilities Act. This ruling remains in place.

The ADA was passed during the time I was in state government while serving as commissioner of the Office of Mental Retardation and Developmental Disabilities (OMRDD) , which is now called the Office for Persons with Developmental Disabilities (OPWDD). A major driving force of the agency was the promise of the Willowbrook Consent Decree, which was signed in 1975 by Governor Hugh L. Carey. The Decree is a prime example of the struggle for civil rights of individuals. It established that residents of Willowbrook had a constitutional right to be protected from harm, and required New York State to take immediate steps to improve the lives of those who lived there and to “ready each resident…for life in the community-at-large.”

The Decree also called for the placement of Willowbrook residents in the “least restrictive and most normal living conditions possible.” My responsibility as commissioner was to make this Decree a reality.

Among several important building blocks for the ADA were the Developmental Disabilities Assistance and Bill of Rights Act of 1975, the Education For All Handicapped Children Act, also passed in 1975, and the Civil Rights of Institutionalized Persons Act of 1980.


These laws were among the earliest building blocks  in federal civil rights legislation protecting people with disabilities, leading eventually to the 1990 Americans with Disabilities Act.

In addition to being impressed with these markers in the battle  for civil rights for persons with disabilities, I  was curious about  the key political actions and actors that pushed our elected officials to pass the ADA. Thus I discovered a person called Reverend Wade Blank. I was not at all familiar with Wade Blank nor his activism, but as I explored his work I came to greatly admire him and his accomplishments, and am chagrined that I did not know him. It takes courageous people and acts to win the rights of U.S. citizens that are guaranteed by our Constitution. The Reverend Wade Blank epitomizes this fortitude.


I found out about the Reverend  from a piece written by Justin Dart and published by the Peer Action Alliance in 2014. Dart was an activist and advocate for people with disabilities. He helped pass the Americans with Disabilities Act and co-founded the American Association of People with Disabilities (AAPD). Some advocates consider him the “father of the ADA.”  As reported in Dart’s article, Wade took a radical step - as that was perceived in 1974 - when he founded the first Center for Independent Living in Colorado, the Atlantis Community in Denver, a program to enable people with severe disabilities to leave the isolation of nursing homes and live in the mainstream.

Dart says that Wade, in “the tradition of Martin Luther King made equal access to bus transport the symbol of full equality.  Rosa Parks protested the indignity of being forced to sit in the back of the bus. We can’t get on the bus at all.” On July 5th and 6th, 1978, Wade and19 people with disabilities illegally detained an inaccessible bus at the intersection of Broadway and Colfax in Denver.

A Denver News piece in 2015 states that Wade Blank led “this group who blocked the intersection all day and night, chanting their mantra, ‘We will ride!’ until representatives of the Regional Transportation District (RTD) in Denver were willing to talk about the absence of wheelchair-accessible buses. It was this initial protest that brought public light to the many other kinds of discrimination and abuse faced by the disabled community. “


ADAPT was born from this experience – American Disabled for Accessible Public Transit, another achievement of the indefatigable Wade Blank. For the next 12 years, he organized several protests across the country in blocking access to public transportation and public buildings. The ADAPT name changed and  is now  derived from American Disabled For Attendant Programs Today. 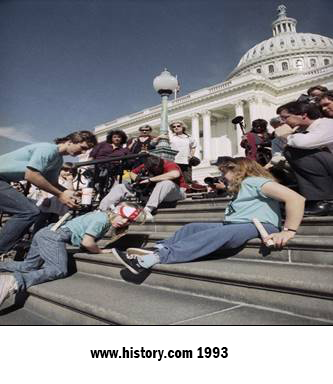 The writer Justin Dart continues on in his article,  “In March of 1990, with the fate of the ADA hanging in the balance, Wade organized the historic march of disability rights leaders from the White House to the U.S. Capitol to demand a law that would provide full equality, with no weakening amendments.” People with severe disabilities crawled up the Capitol steps and were arrested as they demonstrated in the rotunda. ADA passed in July – “with no weakening amendments.”

Wade continued on with ADAPT in using civil disobedience, with a particular policy focus on demanding that the federal government provide funds for personal assistance services.

He tragically died on February 15, 1993, in rough seas off  a beach at Todos Santos, Mexico. He was trying, unsuccessfully, to save his drowning eight-year-old son, Lincoln.

My article has three points to contemplate: A reminder that the fight is never over to gain and assure that the rights of individuals with disabilities are guaranteed; to understand the valiant history of the struggle,  and to recognize people like the Reverend Wade Blank. These “whys and wherefores” inform who we are today.

I ask, “How many steps are we willing to climb to advance the rights of people with disabilities?  Who is the next Wade Blank?”