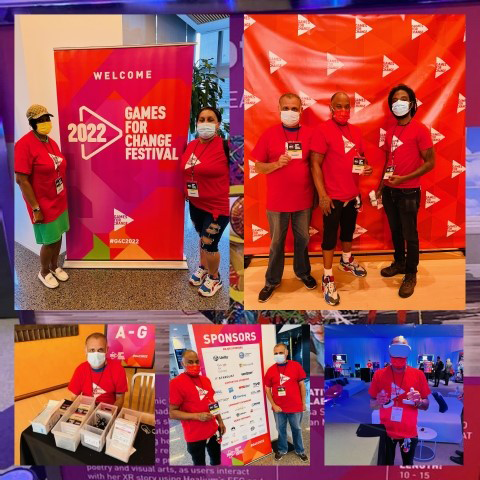 The Virtual Reality Simulator Convention took place at the Microsoft building and at the New York Times building in Midtown Manhattan. The event was held July 13th and 14th. It hosted several virtual reality creators, a number of guest speakers, and donors.

Louis, Jeanette and Carlos with Raul Lewis, DSP, from Lifespire, volunteered for the two-day event, assisting the event production staff and team members. This is the third year that Lifespire has been involved with the Virtual Reality Simulator Convention. They were requested to help direct attendees and conference speakers and also assisted with room setup throughout the convention space. They were also involved with the setup of refreshments for the guest speakers and for the volunteers. They also had some fun when they assisted the virtual reality creators at the various booths, making sure the headsets and the 3D eyewear were all sanitized after usage for every guest.

Since 2004, Games for Change has offered programs and events for people of all ages and backgrounds to explore, learn, and create at the intersection of games and social impact.

The virtual reality industry has become a major component of this high-tech economy. Virtual reality is the use of computer technology to create a simulated environment. People familiar with virtual reality technology are aware that it is becoming a significant force within the entertainment industry and is also breaking into education, science, manufacturing, and other areas.